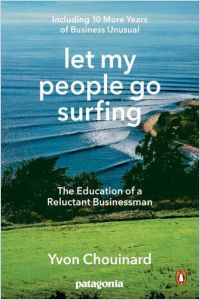 In this memoir, Patagonia founder Yvon Chouinard lays out his unconventional business philosophy. The book – first published in 2005 and updated in 2016 with “10 more years of business unusual” – is a joy, but Chouinard only briefly addresses the main paradox in his business model: how to make sustainable gear affordable for the masses. Patagonia’s price tags are notoriously steep – $35 for a T-shirt or a pair of boxer shorts and $119 for a pair of jeans. Will consumers accustomed to fast fashion take Chouinard’s advice to buy a few high-quality garments and keep them for years? He’s an inspirational figure of great accomplishment, and his book includes wonderful surfing and climbing photographs, which few business biographies feature. getAbstract recommends this eccentric autobiography to managers seeking creative, sustainable approaches to commerce and to anyone who might enjoy the climb.

Yvon Chouinard is founder and owner of Patagonia Inc., an apparel and sporting goods company based in Ventura, California.

Yvon Chouinard was born in Maine in 1938 to a French-Canadian family. In 1946, his family moved to Southern California, seeking a climate that would be more agreeable to Chouinard’s tough, hard-working father, who suffered from asthma. The move was difficult for the young boy. He was short, had a feminine name, didn’t speak English and became a target of bullies. His parents moved him into a parochial school, where he was a D student.

Chouinard took solace in the outdoors. He spent hours fishing, catching frogs and hunting rabbits. In high school, he was a so-so student. Bored, he passed the time in math class counting the perforations in the ceiling panels. History class presented an opportunity to work on holding his breath, a useful skill for his weekend free-diving trips. His fondest memories were his surfing excursions to Mexico during school holidays and joining the falconry club that helped pass California’s first falconry rules. The club introduced him to rappelling and, later, rock climbing. He graduated from high school in 1956 and went to community college for a couple of years.