Summary of Letters to a Young Lawyer 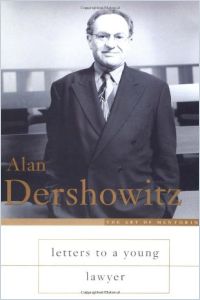 This is an excellent book - well written, cogent and persuasive - the perfect launch of the new Art of Mentoring series. Alan M. Dershowitz, an impassioned and outspoken attorney, is keenly aware of the risks and pitfalls of legal practice. He squarely confronts the fact that lawyers often find themselves having to make moral or ethical choices in ambiguous circumstances in which the lesser of two evils is the only possible choice because there is no clear good - and yet, no clearly lesser evil. The book does not pretend to be objective. It is a compilation of advice, great courtroom war stories, practical tips and philosophical conclusions. Dershowitz is a fighter who chose his side long ago and has no intention of deserting it. Some of his more liberal positions will seem wrong-headed or ill-considered to those who disagree. Well, not ill-considered; he is a thoughtful man who takes lawyering seriously. getAbstract.com recommends this book to you whether or not you intend to study or practice law. It is valuable for an audience far broader than only young lawyers, including those who hire them.

Alan M. Dershowitz, one of the best known defense attorneys in the United States, is the Felix Frankfurter Professor of Law at Harvard Law School. He is also a columnist, lecturer, book reviewer and author. His other books include The Best Defense, The Case for Israel, America Declares Independence, Supreme Injustice: How the High Court Hijacked Election 2000, Reasonable Doubts and others.

As a young lawyer, be careful whose advice you take and whom you choose to emulate. Experience alone doesn’t mean much. Some people spend decades repeating the same mistakes and never learning a thing from them. Don’t take general, all-purpose, one-size-fits-all advice. Unless advice is tailored to you, it’s probably not worth hearing.

Alan Dershowitz admits he is as vulnerable to flattery as the next guy. Of course, as a well known author and Harvard law professor, he has a fascinating legal practice. Not many people would want to deal with the issues that confront him - everything from death threats to high praise. He picks the cases he wants to get involved in, and he gets thousands of requests per year. He takes only a handful. He doesn’t need money; in fact, half of his work is pro bono. He often turns down the famous in order to represent the obscure. But he’s represented his share of celebrities, too.