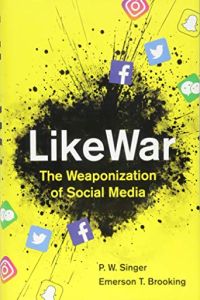 Today’s internet is a battlefield and social media has become a weapon of politics and war. Messages on Twitter, Facebook, WhatsApp, Instagram, WeChat and a slew of other popular social networks around the globe are ammunition for battles which rely on hacking – not the networks, but the information they contain. Social media’s decentralized technology allows individuals and groups to start fights which blur the lines between on- and offline violence. Threats made online can translate to real-life bloodshed in some cases; in others, the spoils of war are the vast amounts of attention certain provocations garner. Each statement posted online can spark a new skirmish in the war to garner “likes.”

Defense analysts P.W. Singer and Emerson T. Brooking lead readers on a fascinating, often harrowing, tour of this new online frontline. They explain how deception and disinformation function within digital spaces, how different governments and tech leaders are responding and what individual users should know about how information is manipulated online. Though not particularly long, their book provides incisive analysis of how various players leverage the internet for battles of differing kinds.

P.W. Singer is Strategist and Senior Fellow at the New America Foundation. He has worked as a consultant to the FBI, the American military and Hollywood. Emerson T. Brooking was a Research Fellow at the Council on Foreign Relations and has contributed to Foreign Policy, The Atlantic and Popular Science.

LikeWar builds on a history of using communication tools to speed up and enhance political battles.

The weaponization of social media builds on a history of using communication tools to speed up and enhance political battles, Singer and Brooking argue. The radio, for example, was the weapon that supported Germany’s blitzkrieg, allowing coordination that helped the Nazis attack France. ISIS was among the early adopters who saw social media’s potential for drumming up support for a political cause. In 2014, it began using the hashtag #AllEyesOnISIS as a way to leverage internet algorithms to strengthen the group’s visibility. The hashtag allowed the terrorist organization to claim digital and physical territory, alike. Its opponent, the Iraqi military, was also using social media. The public was encouraged to “like” posts such as one which announced the army had shot down an ISIS drone.

The internet as it is known today grew out of networking innovations that began in 1958 when the Pentagon formed the Advanced Research Projects Agency (ARPA) so that the United States could match the Soviet Union in terms of technology and science. From the printing press to the telegraph, means of mass communication have long helped disseminate political ideas and news. They’ve also turned news into profit: Benjamin Franklin employed fake news long before Donald Trump started talking about (and creating) it – though, according to Singer and Brooking, Trump’s use of Twitter may have jump-started modern social media warfare.