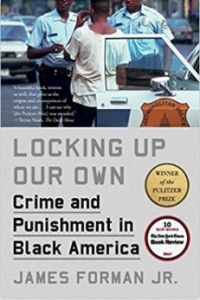 Locking Up Our Own

Crime and Punishment in Black America

The review below was first published in the getAbstract Journal on Aug 4, 2021.
We’ve reviewed this title for you as we currently cannot offer a summary.

Unequal Under the Law

Yale Law School professor James Forman Jr., a former Washington, DC public defender, co-founded the District’s Maya Angelou Public Charter School. In broad strokes and in specific detail, his 2018 book provides an historical overview of the United States’ history of incarcerating Black Americans and the ever-growing American gulag. Forman points out that the United States has only 5% of the world’s population, but 25% of its prisoners.

Forman’s objective indictment of the US judicial system won the Pulitzer Prize for General Non-Fiction; The New York Times Book Review named it one of the 10 Best Books of the Year; and it was a finalist for the Los Angeles Times’ Book Prize. This groundbreaking, comprehensive work drew reviews on par with its prizes. The Wall Street Journal said Forman’s work “doesn’t play down the history of racism in our criminal justice system, but it does explain why racial bias doesn’t tell the whole story.” Bryan Stevenson, author of Just Mercy, said that Forman, “carefully exposes the complexities of crime, criminal justice and race. What he illuminates should not be ignored.”