Summary of Longitudes and Attitudes 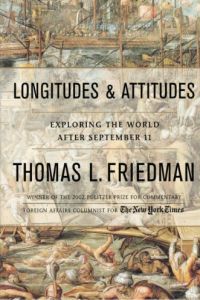 If The New York Times were a high school yearbook, Thomas Friedman would be "Most Likely To Succeed." For more than two decades, he has trained his agile, disciplined mind on unraveling the palace intrigue and radical movements of Middle Eastern politics. He tells a story about a waitress in chaotic, war-torn Beirut, who politely asked if he would rather have desert now or wait until the ceasefire took effect. His point: humans can adapt to virtually anything. In this compendium of columns plus a diary of post-911 events, Friedman argues that 9/11 stemmed from U.S. failure to retaliate against prior terrorism. Here, he kicks over the log and shines his light on the origins of the religious intolerance that created 9/11. It’s not a pretty sight, but you had better look. To be even modestly informed about today’s issues, getAbstract maintains, you need to read this.

Nationally syndicated columnist Thomas L. Friedman is arguably the leading journalistic mind reporting on the Middle East and Israel. On three occasions, he has won the Pulitzer Prize for his work at The New York Times. He has written two best-selling books: From Beirut to Jerusalem, which won the National Book Award for nonfiction; and The Lexus and the Olive Tree: Understanding Globalization. He resides in Bethesda, Maryland.

A timeless Bedouin legend offers poignant commentary on the terrorist threat now facing the United States and, indeed, the world.

An elderly Bedouin leader thought that he could restore his virility by eating turkey. One day, thieves steal the turkey he was fattening. The elder gathers his sons and orders that at all costs the turkey must be recovered, but his children ignore him, failing to see the urgency. A month later, someone steals the old man’s camel. "What should we do about the camel?" the sons ask. "We’ve got to get my turkey back," the elder replies. The sons don’t see the connection and ignore him again. Finally, a few weeks later, the old man’s daughter is raped. "This is all because of the turkey," he chastised his sons. "Once they realized they could take my turkey, everything was lost."

After years of allowing terrorism to continue without really punishing the offenders, America lost its turkey. For two decades, the West allowed the forces of intolerance to mount attacks - embassy bombings, hijackings - without consequence. The horrors of September 11, 2001, were the part of America’s failure to get its turkey back.