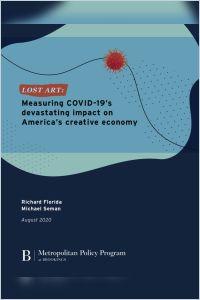 As COVID-19 swept the United States, the creative economy lost jobs and sales plummeted. Richard Florida and Michael Seman report on Brooking Institution research calculating those losses from April through July 2020 (the report’s stopping point though, of course, the pandemic’s impact continued) and charting them by occupation, business type, city, state and region. The report concludes that only a large scale recovery strategy involving federal, state and local governments can save the arts and culture economy. The United States’ quality of life is at stake.

The once-in-a-lifetime COVID 19 pandemic had a tremendous negative impact on the arts and artists in the United States.

From April 1 through July 31, 2020, the COVID-19 pandemic wreaked havoc on  the United States’s creative economy. This report measures the impact on the arts by occupation, industry type, region, state and major metropolitan areas. The “creative economy” is essential to the United States’ culture and quality of life. For example, the arts may often be a primary reason people visit or move to a new place.

The pandemic affected creative industries and businesses such as ad agencies – and all who work in them – and well as creative occupations no matter what the venue.

To understand the pandemic’s impact on creative industries, consider the arts from two perspectives.

The first is made up of businesses that create products and offer services in many fields involving arts and culture. For example, this group might include a ballet company and its crew and staff: dancers, massage therapists and the marketing director. Not surprisingly, fine and performing arts suffered the greatest job losses, at 1.38 million nationally in the period analyzed. Culture and heritage suffered the least, at slightly fewer than 30,000 job losses. The design and advertising industry experienced double-digit unemployment with 13.2% of jobs lost, for a total exceeding 365,000.

The second component is made up of creative occupations, regardless of industry type. This includes, for example, car designers working for automobile manufacturers or bench carpenters making custom kitchens.

To measure the extent of the losses, researchers constructed a model to estimate the initial effects of the crisis on jobs and sales revenues. They used jobs and earning data provided by EMSI – a labor market analytics firm – and professional standard industry and occupation definitions.

The US census identifies four regions of the country – the Northeast, South, Midwest and West. The 16-state Southern region led in the number of creative jobs lost; four states, Texas, Florida, Georgia and North Carolina, are among the top ten job-loss states.

The West had the second highest regional job loss; California suffered the highest losses in the country, both by industry type and occupation. New York State is a distant second. States with smaller, less diversified economies – such as Alaska, Nevada and New Mexico – lost fewer jobs, but those creative jobs represented a higher percentage of the state’s economic engine.

The impact on the 53 metropolitan areas (those with one-million plus population) charted is revealing because creative endeavors tend to cluster in high population centers. The United States’ 53 largest cities account for more than 80% of total losses in arts-related sales and 68% of the estimated related job losses. Among them, New York City lost the most jobs, followed by Los Angeles. The technology centers of Seattle, San Francisco and San Jose (CA) faced the fewest job losses among the 53 metro areas. This reflects their density of creative-technology industries, which serve multiple industries, including sports, media and visual web content.

“Any lasting damage to the creative sector will drastically undercut our culture, well-being and quality of life.”

Brookings’ “conservative approach to estimating the extent of losses to the creative economy” assumed that most states would remain in stay-at-home mode until mid-May or June 1, 2020 at the latest and that arts-related institutions and industries would have reasonable support from government stimulus grants for companies, nonprofits and self-employed artists.

Findings indicate that no small-scale fixes will heal these wounds. Only a sustained and substantial effort, led by local, state and national governments, corporations, arts and cultural organizations, economic development groups and the private sector can bring back the vibrancy of United States’ arts and culture offerings.

Difficult times call for creative strategies. Local economic development agencies might seek local talent for strategic and immediate needs, such as making masks. Additional infrastructure funding should include plans for a New Deal era-type arts project, similar to the Federal Arts Projects of the 1930s and 1940s. Reduced real estate prices might provide an opportunity for more affordable live-work space for artists. Governments should consider direct stipends to creative workers.

This is not overall a tale of woe, although the numbers are disheartening. It serves as a clarion call and an empowering tool for creative workers, foundations, governments, NGOs and citizens who want to save the arts.

Richard Florida, a professor at the University of Toronto’s School of Cities and Rotman School of Management, is the author of The Rise of the Creative Class and The New Urban Crisis. Michael Seman, an assistant professor of arts management at Colorado State’s LEAP Institute of the Art, is a research associate in its Regional Economic Development Institute.

How Pandemics Change History
0
When Will We Want to Be in a Room Full of Strangers Again?
8
The Future of Jobs in the Era of AI
8
Jobs of Tomorrow
8
The Back-to-Work Playbook
8
Business Resilience
9