Summary of Managing Up 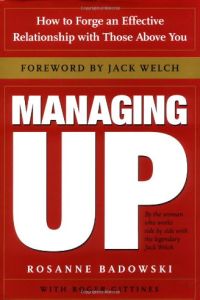 This is the reminiscence of a famous CEO’s secretary, but it is better than you might expect. Jack Welch’s former executive assistant and now author Rosanne Badowski spins anecdotes nicely. She also provides some possibly inadvertent grains of salt to season everything else you may have read about her boss. However, the idea that her warmly chatty observations can generate a respectable book is a tribute to the power of his legend - and her entertaining recollections. The image of a CEO whose secretary has to go through his trash to keep track of what he’s been doing is very revealing. So is the idea of a secretary going behind her super-boss like Mommy behind a toddler, turning off faucets he can’t be bothered to shut for himself. Welch acknowledges in the forewordthat he was a difficult, sometimes aggravating boss. He says Badowski, "lived and breathed work," and he praises her "loyalty, discretion and forgiveness" and well as her long hours, the care she took with confidential information and her talent for dealing with those who seek it. Badowski pulls few punches, so you may well agree with Welch’s self-assessment after you read her book. However, Welch was also, on occasion, a brilliant manager, and Badowski became a strong one, too. getAbstract finds that her up-close viewpoint includes some useful managerial insights and just enough gossip to keep your batteries charged.

Rosanne Badowski worked on the administrative support staff at GE for more than 25 years, 13 of them as the executive assistant to CEO and chairman Jack Welch. When Welch retired in September 2001 and established a private consulting firm, she joined him as his principal lieutenant and chief of staff. Roger Gittines is a writer based in Washington, DC.

A major newsmagazine referred to executive assistant Rosanne Badowski as Jack Welch’s secret weapon. Instead, she modestly avers that she was a good soldier, alert and aware, able to decide what her boss, then CEO of GE (General Electric), did or did not need to see. She worked according to these principles:

When Welch first interviewed Badowski for the job as his executive assistant, she was relaxed and conversational because she didn’t think she really wanted the position. When Welch said she reminded him of his ex-wife, she thought the interview and her chances were both finished. But Badowski was exactly what Welch wanted: quick, responsible and willing to work hard. Even so, she worked a year before she felt really comfortable in the role. She found Welch realistic, but impatient and hard to understand, given his Boston accent. As they formed...

Be Fierce
8
Private Government
9
Suddenly in Charge
8
Girl, Stop Apologizing
8
Extreme You
8
Beyond the Label
8