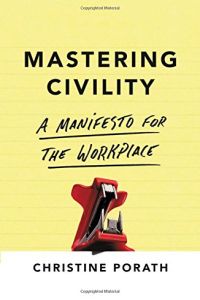 How people treat each other matters. “Incivility” in the workplace is rampant and worsening. Organizations that ignore or allow bullying, rudeness, and other disrespectful behaviors suffer lost productivity and employee disengagement. Management professor Christine Porath conducted extensive research on workplace “civility,” surveying thousands of people worldwide in organizations large and small. Porath designed her practical guide for leaders who want to infuse civility into their corporate cultures and for individuals striving to exert a more positive influence. getAbstract recommends this manual on workplace relations to HR professionals, leaders, small-business owners and everyone whose mom already told them to be nice.

The Growing Loss of Workplace “Civility”

Imagine this scenario: An entertainment company decides layoffs are necessary. As the vice president breaks the news to a loyal employee, the general manager works nearby with his feet propped on the table, ignoring the exchange and expressing no empathy toward the worker. Such displays of rude behavior makes people feel slighted, ignored and disrespected.

Unfortunately, rudeness is on the rise. In the “Civility in America 2016” survey, 95% of respondents said “incivility” is a major problem in the United States. Workplace incivility takes many forms: making calls or texting during meetings, yelling at employees, belittling or heckling subordinates, taking credit for someone else’s work or ideas, and undermining other people’s efforts. Often, people are uncivil when they’re tired or stressed. Generally, they’re not aware of how their actions affect others. Yet, unintentional rudeness is also destructive. When someone feels hurt, it doesn’t matter if the precipitating behavior wasn’t deliberate.

How We Work
7
Lead. Care. Win.
9
How Not to Manage People
8
Back to Human
8
The Courage Map
8
Bring Your Human to Work
7