Summary of Masterpieces of Swiss Entrepreneurship 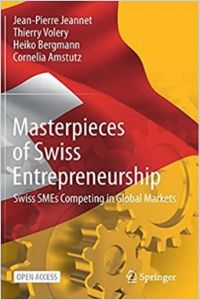 Swiss academics Jean-Pierre Jeannet, Thierry Volery, Heiko Bergmann and Cornelia Amstutz offer an in-depth study of three dozen Swiss companies that have withstood competition and intergenerational succession planning. The authors find common themes and compelling tales among these hardy businesses. Business leaders who don’t necessarily want to take over the world, but who do want to build something that lasts, will welcome this study of Alpine inspiration.

Jean-Pierre Jeannet served on the faculty of Babson College from 1974 to 2013. Thierry Volery is professor of entrepreneurship and director of the management department at ZHAW School of Management and Law. Heiko Bergmann is an adjunct professor of entrepreneurship at the University of St. Gallen. Cornelia Amstutz is a research associate at the University of Lucerne.

This overview of three dozen Swiss companies with decades-long track records ranges from Sefar, a weaving company launched in 1833, to Wyon, a battery maker which opened in 1999.A handful of these companies have operated since the 19th century.They rely on an array of strategies to compete in a variety of industries, but most of the founders launched their companies as young men, and only a few came from wealthy families.

Most of the firms studied remain family-owned.

Ownership of the three dozen companies studied has remained under family control across generations. Subsequent offspring of founders have remained devoted to controlling these companies and maintaining...

The Swiss Army Knife for Leaders
8
The Code of Capital
9
Rule Makers, Rule Breakers
8
The Creative Mindset
7
The Little Book of Stoicism
8
Designed to Win
8