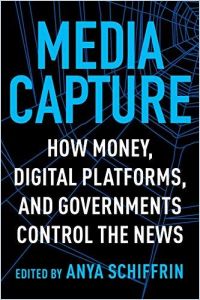 Columbia University media expert Anya Schiffrin identifies tax-based solutions and philanthropic donations as two ways to revive independent journalism, which has waned worldwide as widespread “media capture” – government and corporate influence over the media – skews the news. The new media’s vulnerability to capture-and-control ownership has increased because journalism’s commercial business model in many ways no longer functions. Financial support from Google, Facebook and other tech titans is an unlikely fix; these giants do not produce content, they capture companies that do.

Anya Schiffrin, director of the technology, media and communications specialization in the School of International and Public Affairs at Columbia University, is the editor of African Muckraking: 75 Years of African Investigative Journalism and Global Muckraking: 100 Years of Investigative Reporting from Around the World.

Advertising flows to big technology companies – away from news media – draining the resources available for journalism.

An uninformed public is an unwelcome consequence of financial and governmental constraints on journalism. The commercial capture of the news media commands less attention than violent repression of journalism and journalists, but it discourages robust reporting. The threat of media capture has grown since the traditional business model for publishing news collapsed.

Large technology companies are both captors and disrupters of the traditional news business, and they now dominate advertising. For example, Google and Facebook are advertising monopolies. Ad revenue soared on their platforms while sinking at US newspapers, which reduced their number of editors and reporters by 38% from 2005 to 2015. This disruption is so severe that Google and Facebook now provide funding to news publishers.

Amazon, Apple, Facebook, Google and Microsoft constitute Big Tech; they are hosts, not creators, of content. They value growth in the number of users more than any other measure, and they all have scant incentives...