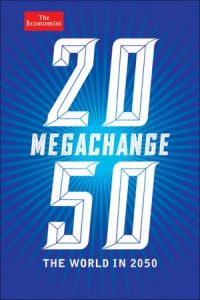 This anthology’s essays forecast future developments in areas from social media to religion. Daniel Franklin, executive editor and business affairs editor of The Economist, and John Andrews, a writer for the magazine for 30 years, compiled and edited this volume. Since all 20 writers contribute to The Economist, they share a lucid style and a generally aligned conceptual framework. No one can promise accurate predictions, but these reporters share deeply informed insights about forces that will affect the world by 2050. The result is a useful, intriguing mosaic of the near future. The writers clearly explain complex concepts as their shared references let one essay build synergistically on the next. Readers who already know the contents of one essay will turn the page to remark on how startling the next one is. getAbstract recommends this collection to futurists, long-term planners, and readers interested in social analysis and forecasting.

Daniel Franklin is executive editor and business affairs editor of The Economist. John Andrews, who has written for the magazine for 30 years, also wrote The Economist Book of Isms.

The Core of “Megachange”

It took 250,000 years for the world’s population to reach one billion people, in about 1800. In two more centuries, population accelerated faster to reach seven billion late in 2011. This is a “megachange: change on a grand scale that happens at a remarkable speed.” Looking at megachanges unfolding now, several trends will shape the world of 2050. Populations will continue to increase and to age. Though simply projecting the present forward in a direct line is tempting, society will face disruptive change, and change in one realm will affect others. The East is rising, so global power is shifting that way. While some changes will be negative, progress will continue in many areas.

Demographics are “not quite destiny,” but demographic trends are powerful and sweeping. The growth in the human population will be the single biggest demographic change. In 2050, Earth will be home to nine billion people. This growth will not be uniform: Some nations’ populations will soar. Half of the population increase by 2050 will happen in Africa, which will hold three times as many people as Europe. Nigeria will have about 390...