Summary of Merchants of Truth 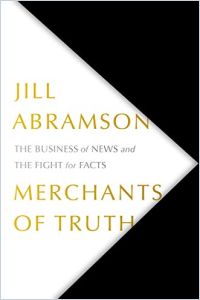 As the 21st century opened, newspapers found their environment had changed, and the traits that had allowed them to thrive were now liabilities. The internet, social media and the smartphone changed how people consume news. Former New York Times executive editor Jill Abramson traces how the Times, The Washington Post, BuzzFeed and Vice navigated disruption. Her writing is clear, engaging and packed with detail. Facing accusations of plagiarism, she clarified that missing attributions were mistakes. No one questions the value of her insider's perspective or the accuracy of her information, which has great value for media consumers.

Senior lecturer at Harvard University and Guardian columnist Jill Abramson was executive editor of The New York Times and also worked at The Washington Post and The Wall Street Journal.

The early years of the 21st century brought radical transformation to the news media. In the previous century, the touchstones of journalism had been family-owned newspapers such as The New York Times and The Washington Post. They were responsible for scoops like the Watergate scandal and the Pentagon Papers. The Times and Post faced similar problems from the disruptive force of the internet.

Upstart digital media outfits forged new business models that undermined the traditional media. Publishers such as BuzzFeed and Vice profited by ignoring distinctions between the news-gathering and the business sides of publishing, and by blurring distinctions between advertising and editorial content. Algorithm-based platforms such as Facebook and Google News eliminated the role of the editor as the arbiter of what constituted news. Algorithms prioritized stories people liked and shared.

The new publishing platforms were vulnerable to those seeking to “game” the algorithms and spread “fake news” or propaganda. This threatened the news media’s traditional responsibilities...