Summary of #MeToo in the Corporate World

HarperBusiness, 2020
#METOO IN THE CORPORATE WORLD: Power, Privilege, and the Path Forward. Copyright © 2020 by Sylvia Ann Hewlett. Published by arrangement with Harper Business, an imprint of HarperCollins Publishers.
ISBN: 9780062899194
Pages: 240 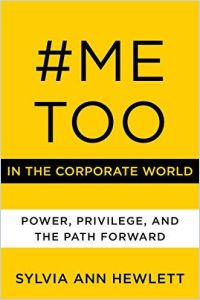 The #MeToo movement brought a storm of change, but its over-focus on the experiences of young, white women is problematic, argues economist Sylvia Ann Hewlett, given that men, older women, people of color, members of the LGBTQ+ community and others also experience abuse. To provide greater safety and support for all, leaders can make changes to corporate values, culture, and procedures for tracking incidents and responses. Studies verify that diversity boosts a company’s bottom line. Thus, Hewlett says, by committing to “inclusive leadership” organizations help their employees – and themselves.

Economist Sylvia Ann Hewlett is the CEO of Hewlett Consulting Partners, founder of the Center for Talent Innovation and author of 14 books, including Executive Presence and The Sponsor Effect.

The #MeToo moment increased public support for victims, but young, white women aren’t the only ones who experience harassment.

The #MeToo movement brought greater public support for victims of sexual harassment, resulting in increased penalties for perpetrators and support for greater leadership diversity. While the movement generally focuses on older, powerful white men who assault or harass younger white women, this narrative is too narrow. Other employees – including people of color and LGBTQ+ staff members – experience as much, if not more, harassment.

Sexual misconduct carries heavy costs for organizations – as CBS, Nike and the Catholic Church discovered. The lasting concern is whether this movement compels companies to change their culture and leadership styles.

In 1991, a US Senator called Anita Hill’s claim of sexual harassment by then-Supreme Court nominee Judge ...