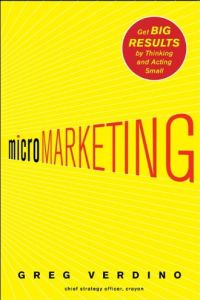 Not too long ago, those with the biggest advertising budget wielded the most influence and won the market. Today, the Internet, social media and mobile platforms have usurped the power of mainstream media. Those who use these vehicles most effectively have the clout. Greg Verdino lays out the best way to market in the evolving social, mobile landscape via a combination of small, targeted and interactive activities that garner notice and nurture relationships. Verdino outlines seven micromarketing principles and supports them with rich, topical case studies. His final chapter includes a questionnaire to help you apply his tactics to your business. getAbstract recommends starting your new advertising resource library with this relevant, applicable text.

Greg Verdino is vice president of Strategy and Solutions, and he blogs about marketing.

In 2009 at Sasquatch, an outdoor music festival in Washington state, Collin Wynter started dancing alone to the music of Santigold. Another concertgoer joined him, followed by a couple of more. After a minute, several more joined the dance; soon hundreds of rollicking bodies covered the hillside. A video of Wynter’s “unself-conscious display” ended up on YouTube. A viral hit, it led millions of people to witness Wynter’s groove. This video of one...