Summary of Minds, Machines, and the Multiverse 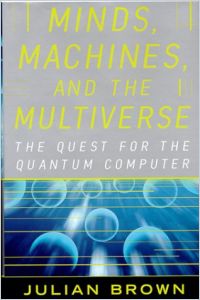 If you’re the type of reader who loves to devour an entire book on a rainy day, you’d better wait for a Noah-size deluge before tackling Minds, Machines, and the Multiverse. Wet or dry, you will marvel at author Julian Brown’s encyclopedic knowledge. He uses charts, graphs and the occasional equation to try to make the inscrutable plain. However, unless reversibility, the Fredkin Gate and the von Neumann machine mean something to you, the essence of Brown’s narrative may elude you, beyond rough translation. He explains the possibility that the notion of alternative universes can be used to create a quantum computer that would be far more powerful than any computer heretofore. Brown persistently reveals possibilities that seem like dreams. getAbstract.com recommends his book to those who strive for news heights of techie theory or who think of physics as a hobby. Though fascinating, it may leave mere mortals feeling uncertain and somewhat overwhelmed.

Julian Brown  specializes in physics and computing as a science journalist. New Science Magazine has featured his work prominently, and he has produced science specials for BBC and BBC World Service. He teamed up with Paul Davies to edit The Ghost in the Atom and Superstrings: A Theory of Everything.

Computing Your Way to a Brave New World

Compare an abacus to the most powerful mainframe computer in the world. Both are information-processing devices with computational capabilities, but the similarity pretty much ends there. Take that same mainframe computer, and compare it to a computer that operates based on the principles of quantum mechanics. Now understand this: the superiority of the quantum computer as compared to the mainframe is greater than the superiority of the mainframe to the abacus. The advances promised by the advent of the quantum computer are awesome, and you cannot afford to ignore what it might be able to do.

Quantum mechanics is the body of scientific knowledge based on the fact that light can be understood equally as a wave or a particle. You can either observe a photon’s state (where it is) or its direction (where it is going), but not both without affecting the outcome of the experiment. In scientific terms, this is essentially saying that the same photon is in two different states at the same time - one a wave, and one a particle. Thus the physical property of indeterminacy exists. But this principle seems impossible... 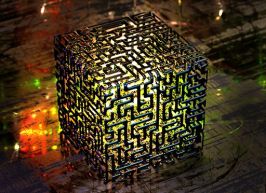