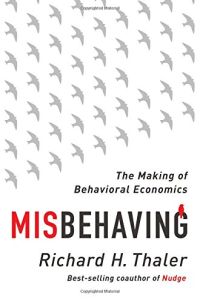 Economics is as mathematical as ever, and it remains rife with unrealistic expectations about human behavior. For theoretical convenience, economists assume that everyone behaves rationally and makes the best possible choices at all times. But, says economist and Nudge co-author Richard H. Thaler, real human beings act in predictably irrational ways. He argues convincingly – and with no shortage of witty anecdotes and all-too-human stories of his own battles with economics orthodoxy – that a dose of behavioral science could produce better economic forecasts, lead to improved public policies and give the dismal science a much-needed human touch. getAbstract recommends this captivating treatise to readers familiar with economics and interested in the evolution of its behavioral aspects.

Richard H. Thaler, the American Economic Association’s 2015 president, is a professor of behavioral science and economics at the University of Chicago. He co-wrote the bestseller Nudge.

Accounting for Human Behavior in Economics

Economics is the most influential of the social sciences because of its far-reaching foundational theories and their impact on people’s lives. These theories say that individuals always make optimal purchasing decisions within their budgetary constraints and that free markets tend toward a state of equilibrium in which the supply of a good or service equals its demand.

But these assumptions are faulty. Ideal decision making is impossible for ordinary people. Consider the act of shopping at a supermarket. With the countless goods available, how can individuals always make the best choices? Optimizing is even harder in such tasks as choosing a spouse; high divorce rates suggest that marital selections are hardly optimal.

Unbiased decision making is another flawed staple of economic theory. Economic models have substituted the human being, or Homo sapiens, for “a fictional creature called Homo economicus,” or “Econ,” a perfectly rational decision maker who always optimizes. Real human decision making often amounts to “misbehaving” in the artificial world of economics, so forecasts based on the rational...