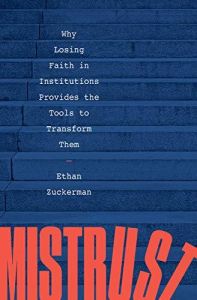 Why Losing Faith in Institutions Provides the Tools to Transform Them

The review below was first published in the getAbstract Journal on Aug 4, 2021.
We’ve reviewed this title for you as we currently cannot offer a summary.

Advocating for Change that Can Restore Trust

Activist Ethan Zuckerman discusses the erosion of trust in American institutions and urges activists to bring about positive change.

Internet activist Ethan Zuckerman – who teaches media sciences at MIT and directs its Center for Civic Media – presents Americans’ mistrust of politics, government, the press and other entities as a loss of faith that has worsened since the mid-1960s. Whatever their politics, most Americans no longer believe in their elected officials or institutions, a stance that threatens democracy, Zuckerman says. He points to activism that leverages software code, the law, social pressure and the marketplace to force change and rebuild trust. Jaded citizens as well as aspiring activists will find this a hopeful text.

The New York Times called this “a kaleidoscopic tour” of people resisting the breakdown in social trust. Publishers Weekly said, “Readers hoping [for] a sea change in American politics will be galvanized by this optimistic account.”