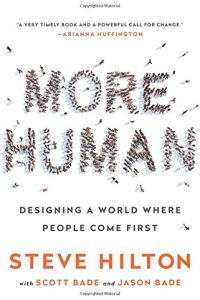 As a former director of strategy for David Cameron, Prime Minister of the United Kingdom, Steve Hilton showcases his ambitious vision when he examines society’s ills. He discusses how to make politics, government, business, education, health care and other activities more human, responsive and functional. He draws examples of problems and solutions from multiple countries, and shares surprising ideas about how to make the world a better place. Hilton calls for changes and proposes solutions. His prescriptive analysis makes a lot of sound, innovative points. While always politically neutral, getAbstract recommends this rich conversation starter.

Steve Hilton is a former director of strategy for David Cameron, Prime Minister of the United Kingdom. Hilton is CEO and co-founder of Crowdpac.com.

Everywhere you look, society’s handling of its functions has become dysfunctional. Arenas as distinct as government, education and health care all share similar weaknesses. Their systems often are inhuman and unresponsive. These standardized, bureaucratized and centralized systems treat people as numbers. Decision makers are distant from the people their decisions affect. The people in charge aren’t necessarily evil. The tragedy is that so many intelligent people who want to do good end up failing, or they do bad things because they work in an inhuman system. People in modern society should identify what doesn’t work, and should ask tough questions about what might work better.

Good government is essential. However, around the world, people are losing faith in democracy. And they should, because corruption has become widespread. Even though the public wants a voice in government and has gained increased access to information, a smaller group of people runs things. In Britain, those people live, study and travel together. This narrows the range of political options among people with authority...

Heartland
9
The Future of Work
9
Sharenthood
8
Squeezed
8
Rule Makers, Rule Breakers
8
This Is the Year I Put My Financial Life in Order
9