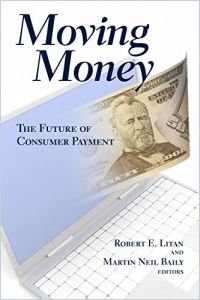 People once used sheep and goats as money. Now they use plastic. Brookings Institution financial experts Robert E. Litan and Martin Neil Baily, along with a panel of top contributors, explain why the way people pay for things is important – and why the consumer payments industry is the essential “financial plumbing” of the US economy. Without a smoothly working payments system, all financial activity would come to a screeching halt. However, the ubiquitous credit-card magnetic stripe is as outdated as eight-track cartridges, and the US payments network is a Rube Goldberg contraption. By spotlighting these issues and more, the writers and editors of this text have developed an outstanding, though not particularly groundbreaking, guidebook to the consumer payments industry. getAbstract recommends their book to bankers, financiers and economists, along with anyone who is curious about what happens after he or she swipes a credit card at the register.

Robert E. Litan is the vice president for research and policy at the Kaufmann Foundation. Martin Neil Baily is former chairman of the US Council of Economic Advisers. Both are senior fellows at the Brookings Institution.

Money is probably as old as human civilization. Domestic animals and food served as currency in ancient times. Metal coins have been around since 700 B.C., and the Chinese began using paper money in 140 B.C. It became a popular means of tender during Europe’s Renaissance and later in the American colonies.

But paper money has drawbacks. For instance, it’s easy to steal. And if something valuable, such as gold, does not back it, notes can proliferate and lose their worth. Throughout history, banks have caused financial panics by issuing paper that did not possess sufficient reserves. In 1913, the US government created the Federal Reserve System (the Fed) to eliminate this problem by controlling the money supply. The Fed also monitored the clearance of checks between banking institutions. Thus, checks became the most widespread payment form until the mid-20th century.

After World War II, money began to convert from paper to plastic. In 1950, Diners Club introduced a credit card that people in New York City could use to pay for restaurant meals. The innovation soon expanded to other regions, and Carte Blanche quickly followed with a card for hotel...