Summary of Negotiating the Impossible 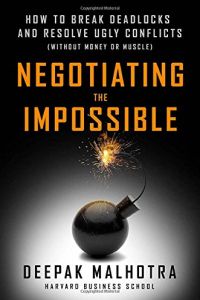 Harvard Business School’s Deepak Malhotra offers you three powerful tools – “empathy,” “process” and “framing” – for successful negotiation. Malhotra describes each technique, gives concrete tips on using it and offers historical examples of its application. He relates how President John F. Kennedy used empathy to defuse the Cuban missile crisis, and how Saudi Arabia’s King Faisal overcame religious resistance to the introduction of television by reframing it as a medium for disseminating the Quran. getAbstract recommends Malhotra’s indispensable manual to entrepreneurs, business strategists, labor negotiators, government officials, and anyone who negotiates salaries or contracts.

Deepak Malhotra is the Eli Goldston Professor of Business Administration at Harvard Business School where he teaches negotiation. He won the HBS Faculty Award in 2011. An international consultant, he also wrote Negotiation Genius and I Moved Your Cheese.

When a negotiation collapses – the other side won’t budge an inch or acts with seeming malice – you may view the other parties as an enemy you must counterattack. Instead, turn to powerful, often overlooked strategies to cultivate a more collaborative, value-creating negotiation: “empathy,” “process” and “framing.”

“The Power of Framing”

When the other side balks at a proposal, consider how you “frame” it. The frame – the way you package and present your proposal – matters as much as its substance. Framing is powerful because it allows you to make proposals that are basically the same “more or less attractive simply by how you present them.”

Framing helped resolve the 2011 contract dispute between National Football League team owners and players. The main point of contention was how to divide profits. The players wanted the owners to split the money 50-50. The owners offered the players a 58% share – but only after they scooped a credit of $2 billion dollars off the top. With the fate of the upcoming season in jeopardy, the owners broke the deadlock with a new frame: another profit-sharing model. They suggested dividing the profits...