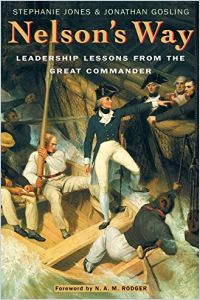 In an age where true heroism seems dead, it's no surprise that modern leaders feel compelled to look to history for suitable role models. The British war hero Admiral Horatio Nelson is such a figure, although his brand of heroism wasn't as perfect as you might hope. Stephanie Jones and Jonathan Gosling, unabashed Nelson fans, analyze his life, finding both inspiration and ambiguity in his exploits. Nelson was a great leader, true, but also a reckless one who sought glory and flouted convention. This intriguing study of his life offers advice and examples that remain useful two centuries after his death. getAbstract recommends this swashbuckling biography and guide to leaders and would-be leaders who want a fresh look at management theory in practice.

Stephanie Jones, Ph.D., is a former management consultant who lectured at the London School of Economics. She is now a fellow at the Centre for Leadership Studies at the University of Exeter, where Jonathan Gosling is the director. He has written for the Harvard Business Review and the MIT Sloan Management Review.

Horatio Nelson is one of the great military figures of the late eighteenth and early nineteenth centuries. His daring strategies and gritty style brought him victories and glory, and secured Britain's place as the ruler of the seas at that time. While his era might evoke images of straight-laced, by-the-books management, Nelson was anything but an old-school, order-barking leader. He was ahead of his time in employing management techniques that work as well today as they did 200 years ago. Nelson owes his success and his lasting legend to a larger-than-life management style you can study by looking at his actions in eight areas:

Nelson took to the seas aboard naval ships as a teenager, and he quickly showed a flair for tackling outsized tasks. At age 14, while on an Arctic voyage, he ran across the ice to kill a polar bear, but his gun misfired and he fled. In 1777, when Nelson was 19, a ship he was on disabled an American schooner. A sudden storm created huge waves, making it nearly impossible for the British sailors to board their captive prize. Nelson volunteered to brave the massive...