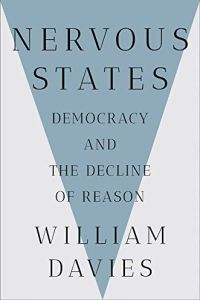 By many objective measures, the United States, United Kingdom and other Western nations are in the midst of unprecedented prosperity. Yet, populist politicians are more popular and bureaucratic institutions face more skepticism than ever. In short, British economist William Davies writes, the decline of reason and the rise of emotion are the new political reality. No example resonates more profoundly than Donald Trump, the populist who became America’s president thanks to an acute understanding of everyday voters’ skepticism toward official statistics and the elite status quo. Indeed, Davis points out, Trump’s very first act as president was to insist that the crowd for his inauguration was far vaster than the one that greeted Barack Obama – despite evidence to the contrary. Trump supporter Kellyanne Conway even coined the phrase “alternative facts” to describe the president’s point of view.

Davies’ insightful analysis of recent political events, explains why it is that, in the modern world, even prosperous, advanced societies find themselves gripped by fear. The seeming disconnect between fact and feelings makes sense in many ways, Davies argues: Rising GDP does nothing for an under-employed factory worker or an out-of-work coal miner. What’s more, the official statistics don’t take the power of jealousy into account: that feeling, even among the affluent, that others are getting an unfairly large piece of the pie. Statistics may indicate people are living higher-quality lives than ever before; but, Davies notes, in “nervous states,” those who feel the sway of nationalism or populism will argue that objective claims are bogus and the nation’s best days are long past.

William Davies is a political economist at the University of London and author of The Happiness Industry. He lives in London.

1. The decline of reason and the rise of emotion are the new political reality.

In London in 2017, reports of a rush-hour terror attack at Oxford Circus induced panic among commuters. Reports of gunshots, bombs and lorry attacks abounded. But, Davies writes, none of it was true. Police could find no evidence of any violence, save a brief fistfight between two surly commuters who had bumped into one another on a train platform. As the episode in London shows, the human brain is wired for angst. Less than a third of the human brain’s capacity is devoted to calm, rational thought. The remaining 70% is designed to deal with both life-and-death emergencies and the mundane management of the body.

The fight-or-flight instinct is useful for self-preservation, but in everyday life, that sort of emotion crowds out cautious analysis. The sense of nervousness is stoked by the modern world’s rapid travel of information across media and social platforms. And it explains why an emotionally evocative lie moves more quickly and powerfully than the mundane truth. In politics, Davies argues, the embrace of fear over reality is the enemy of rational thought and considered decision-making.

A Path to War With Iran
7