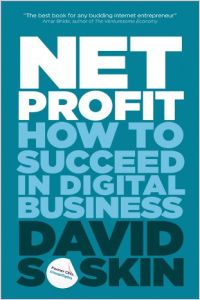 David Soskin’s primer about how to start and run a digital business is comprehensive, which is both his book’s strength and its weakness. At times, the book becomes a choppy laundry list of do’s and don’ts, but Soskin’s citation of case studies of Internet successes and failures, and his tales of running the UK online company Cheapflights Media, will hold your interest. Soskin, a web entrepreneur, begins with the birth of the Internet. He explains various business models, marketing platforms and best business practices. He looks at the digital industry around the globe and provides a glimpse into its future. This is a worthy introduction for the online entrepreneur and an excellent update for the seasoned professional. getAbstract suggests that wannabe online moguls read this overview and then supplement it with texts covering each topic in depth.

David Soskin is the former CEO of Cheapflights Media and current chairman of mySupermarket.co.uk and Swapit.co.uk.

The Origins of the Internet

The Internet as a business medium is only in its third decade, and no certain formula or model for a successful Internet business has yet emerged. Understanding the formation of the Internet, and its early failures and successes, offers entrepreneurs a foundation of applicable knowledge.

The Internet began when the US Department of Defense’s Advanced Research Projects Agency (ARPA) sought to link its research centers in various parts of the country via ARPANet, founded in 1969. The centers used packet switching technology to transmit small units of data between computers. This formed the basis of Internet technology.

In 1981, the National Science Foundation (NSF) created the Computer Science Network (CSNET), which connected to ARPANet, as well as to computers in Europe and Asia. Its users sent the first emails through this network. A few years later, the NSF funded five supercomputer centers, phasing out CSNET and introducing NSFNET. In 1990, Tim Berners-Lee, who was working at CERN, the European Organization for Nuclear Research, invented the World Wide Web, “a system of interlinked ‘hypertext’ documents accessed via the Internet.” ...