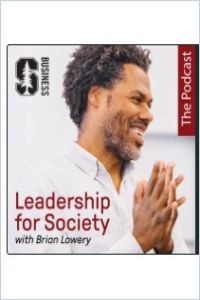 In this incisive, provocative interview with Professor Brian Lowery of the Stanford Graduate School of Business, Color of Change president Rashad Robinson talks power, strategy and justice. Engaging and kinetic, he discusses how the leading online racial justice organization mobilizes millions of members to challenge structural racism. Robinson invests in long-term capacities while capitalizing on flash points of opportunity. He reflects on the promise and pitfalls of online organizing and resonates with optimism about the historic possibilities of this moment of profound cultural flux.

Rashad Robinson, a civil rights leader, has been president of Color of Change since 2011. Under Robinson, the online nonprofit has become the largest of its kind, mobilizing some 7.2 million members in 2020. Previously, Robinson worked with the LGBTQ advocacy group GLAAD. This podcast is part of Leadership for Society, a series of conversations hosted by Brian Lowery, senior associate dean for academic affairs at Stanford Graduate School of Business.

Injustice is about power, according to Rashad Robinson, president of Color of Change, an online nonprofit founded in the wake of Hurricane Katrina to fight injustice and systemic racism. It conducts campaigns to change the distribution of power and the ways people exercise that power. It also works to build power as an organization and within Black communities.

Color of Change mobilizes its membership of some 7.2 million people to take strategic collective action. It designs campaigns that can inflict political, economic, reputational and occupational consequences on governments, corporations and decision-makers that practice injustice and racism. Having built that capability, the organization issues specific demands for positive action backed by credible threats to compel targeted organizations and individuals to respond and acquiesce.

For example, Color of Change pushed the 2016 Hillary Clinton presidential campaign to decline donations from the owners of private prisons by offering it a choice of two Color of Change messages, one...

What Can We Learn from Politics?
7
The Dropout
8