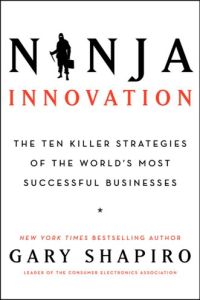 Gary Shapiro, head of the Consumer Electronics Association, studied tae kwon do, the Korean martial art, and earned his black belt. He realized that executives could learn from another class of martial-arts experts, Japan’s fabled warriors: the mysterious, ancient ninjas. These resourceful men used anything at hand to accomplish their deadly missions and became masters of innovation. Shapiro explains how to utilize his version of the ninjas’ ethos, strategies and tactics to achieve your business goals. Unfortunately, this isn’t exactly Sun Tzu on the Art of War. Shapiro floats his advice in off-topic, heated commentary about government, but just cut to the coverage of innovation. The book’s biggest asset is the 24-page epilogue in which Shapiro spells out how he built the International Consumer Electronics Show into the world’s dominant consumer-technology industry trade event. Despite its flaws, getAbstract finds that other association leaders can glean useful benefits from Shapiro’s ninja approach to innovation.

Samurai were ancient Japan’s highborn warriors, like the European knights of medieval times. Samurai lived by a code of honor called Bushidō. Their greatest glory was to die in battle. As 14th-century samurai Shiba Yoshimasa wrote, “One’s main purpose in throwing away his life is to do so either for the sake of the emperor, or in some great undertaking of a military general.”

That’s a noble, heroic sentiment, but not particularly driven by defined goals. The samurai were noblemen. They did not have to be capable warriors; they kept their rank as samurai even if they were poor swordsmen. They valued honor and respect, but not effectiveness or goal attainment.

Japan’s ninja warriors, who worked for the samurai, were completely focused on results. Unlike the samurai, ninjas came from poor families. The samurai selected ninjas based on their exceptional skills as warriors and their special abilities in “espionage, sabotage, infiltration and assassination.” Ninjas were the ultimate overachievers. They judged themselves – and other people judged them – only on their results. They didn’t care about image; they valued success.