Review of No Stopping Us Now 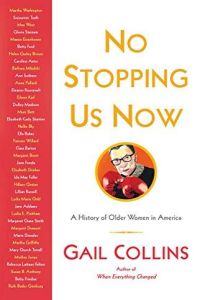 New York Times journalist Gail Collins is the first women to serve as its editorial page editor (2001-2007). The author of six books, she has received numerous awards, including the George Polk Award for commentary.

In the 1800s, Collins reports, pervasive illnesses made old age a sign of good fortune, a mark of God’s grace. While some churches honored older congregants by sitting them near the pulpit, some ministers also encouraged aging women to contemplate death and sit unobtrusively in a corner at home, unless their family needed them to do chores. In farming communities, older women wore tight caps indicating they were no longer on the market for marriage. “The deference and respect that elders received,” the author writes, “was frequently connected to the presumption that they came attached to a certain amount of wealth.”

If a husband died without a will, Collins explains that his widow had the right to one-third of his property until she died. In the 18th century, widows outnumbered widowers by a factor of seven. Though remarriage was popular, Collins finds hints of a route to freedom: some women preferred the independence of widowhood, which allowed them to run businesses and manage their own money.