Summary of Nobody In Charge 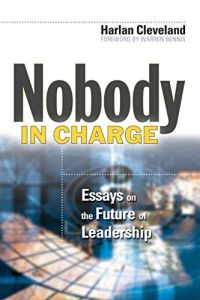 Everyone remembers the reaction when U.S. Secretary of State Alexander Haig took the podium at the White House the day John Hinckley shot President Ronald Reagan in 1981. "I’m in control here," Haig tried to reassure the public, contrary to the constitutional rules of succession. The response was neither outrage nor reassurance that someone was taking the helm. Why? Harlan Cleveland thoughtfully suggests good reasons that the primary reaction to Haig’s statement was bemusement tinged with ridicule. He makes an articulate argument that the era when anyone could be in complete control anywhere has long since passed. The reason? Systems have simply grown too complex to be managed by one individual. Thus, the best leader for the "Nobody’s-In-Charge" society is someone comfortable with decentralization, someone who can arrive at resourceful, unusual solutions. By way of imprimatur, management guru Warren Bennis wrote this volume’s foreword. getAbstract.com recommends this treatise to those who are seriously curious about the ways that technological and societal changes are altering the leader’s role.

Harland Cleveland managed post-WWII relief for the U.N. as a top Marshall Plan official. He published The Reporter magazine and was dean of Syracuse University’s Maxwell School of Citizenship. President John F. Kennedy named him Assistant Secretary of State for the U.N. President Lyndon B. Johnson appointed him U.S. Ambassador to NATO. Founding dean of the University of Minnesota’s Hubert H. Humphrey Institute of Public Affairs, he is currently a board member of the American Refugee Committee and the World Future Society.

Who’s In Charge Around Here, Anyway?

Everyone seems to recognize the importance of good leadership, without being able to really define it. You know it when you see it - but what is it? Who was a better leader, George W. Bush or Bill Clinton? Opinions differ. Would the North have won the civil war without Abraham Lincoln? History will never know the answer.

Leadership, which has probably evoked more hyphenated newspeak and jargon than any other facet of management science, could simply be defined as bringing people together to make something happen. That may sound almost too simple to be true, but it describes what effective leaders do: galvanize attention and get people moving forward together.

Once, leadership was entrusted to a few people equipped with little information and a narrow range of options. They were presumed to be in charge. In Aristotle’s Athens, Charlemagne’s Europe and Jefferson’s Virginia, the educated and affluent made the decisions that determined peace or war, poverty or prosperity. Society was vertical, and everybody knew who was in charge.

That changed when society’s increasing complexity led to specialization or "division of labor...