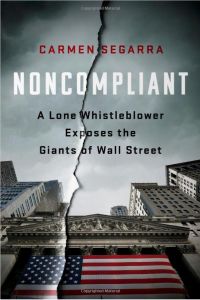 Former New York Federal Reserve examiner Carmen Segarra delivers a first-hand account of what goes into supervising a major financial institution – in this case, Goldman Sachs. Segarra describes the ambiguous management muddle within the NY Fed that facilitated the regulatory capture that all too often arises between federal agencies and the financial institutions they monitor. Her book is an intriguing look at the price a whistleblower pays: Segarra’s revelations ultimately cost her her job.

Carmen Segarra is an attorney and advocate for regulatory reform and transparency.

In 2011, the New York Federal Reserve assigned new hire Carmen Segarra to be a regulatory examiner of Goldman Sachs.

Segarra, an experienced lawyer, had graduated from Harvard and earned degrees in cultural studies from Columbia and in law from Cornell. She had worked at major financial institutions, handling legal and compliance matters. When she joined the NY Fed in 2011 as a bank examiner, Segarra quickly learned that the agency, charged with regulating the nation’s largest banks, was in fact helping them – specifically, Goldman Sachs – to skirt banking laws.

Her review of the institution revealed numerous instances of Goldman breaching banking regulations, particularly in the area of conflicts of interest. But even beyond her discoveries, she also found the NY Fed’s overall deference to Goldman troubling. Her insistence on bringing several examples of Goldman’s noncompliance to light irked both the financial institution’s senior managers and her bosses at the NY Fed. Their shared uneasiness resulted in the NY Fed firing Segarra after less than one year at her job.

The Financial Crisis and the Free Market Cure
7
Investment Banking Explained
7
The Value of Everything
8
Darkness by Design
8
What a Solidarity Economy Looks Like
8
What is the repo market, and why does it matter?
8