Summary of On the Referendum #21 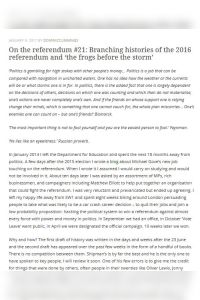 The Brexit vote was the first 2016 political upheaval, followed months later by Donald Trump’s surprise win. Both elections elicited hand wringing from establishment types, who didn’t see the upsets coming. The results led to a glut of populist gloating that the outcome was obvious. In this inside view of the Brexit vote, Dominic Cummings, architect of Vote Leave, acknowledges that his side easily could have lost. The vote hinged on a few minor mistakes by Britain’s political establishment and on Vote Leave’s lucky breaks. To his credit, Cummings doesn’t make this report a victory lap full of I-told-you-so’s. Instead, he admits that if the opposition had been a little less smug, disorganized and out of touch with the working-class voter, Brexit would have lost as expected. With Brexit and Trump, populism won despite old-guard opposition and mainstream media skepticism. With both, swing voters were crucial. No matter how you see Cummings’ political views, you’ll find him shrewd at reading working-class voters. As he compellingly argues, UK swing voters don’t fit neatly into a single party’s platform. Contrary to the carefully categorized positions the political establishment packages and prefers, swing voters pick and choose positions from both sides. Their omnivorous ideological mix simply seems foreign to those deeply embedded in ordinary partisanship. Across the pond, swing voters in America’s equally unpredictable Rust Belt delivered the White House to Trump. One warning about Cummings’ long blog entry: If you’re not versed in Brexit’s details, you could be perplexed. He writes or blogs in stream-of-consciousness style referring to names and numbers he doesn’t fully explain.

The Long Shot Wins Due to “Fear, Self-interest and Vanity”

In 2015, members of the British Parliament and a few wealthy businessmen recruited political consultant Dominic Cummings to run a campaign to persuade voters to support having the UK leave the European Union. Establishment politicians, business interests and the media favored staying in the EU. Contrary to conventional wisdom and against long odds, the Vote Leave campaign won the referendum on June 23, 2016.

Fear, self-interest and vanity drive all political debates. While educated voters are supposed to apply logic to political decisions, human beings are irrational. The more education people have, the less likely they are to listen to opposing views or to change their minds. If only 1% more voters had voted to “Remain,” the “IN” vote would have prevailed.

Success hinged on tiny developments during the campaign. If Michael Gove had stayed on the sidelines or if Boris Johnson hadn’t supplanted the widely disliked Nigel Farage as Vote Leave’s most prominent spokesman, the leave campaign would have lost. Or it would have succumbed to its internal squabbling over strategy...

Where Did You Get This Number?
8
The End of Europe
7