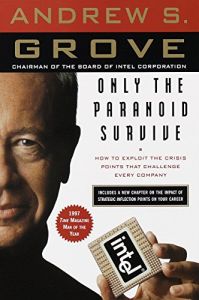 Book Only the Paranoid Survive

How to Exploit the Crisis Points that Challenge Every Company

Part business memoir and part corporate-strategy guide, Andrew S. Grove's insightful book gives the reader an inside look at how microprocessor giant Intel prospered in one of the most competitive industries on earth. Grove writes candidly about the moments when he had to admit his company was simply failing to keep up with the competition. His response: to undertake drastic changes in his organization. Grove writes about what it is like to lead a company out of the wilderness of change and into safer, more secure markets. He also introduces useful tools and ideas that will help the next generation of corporate scions stay ahead in times of rapid change. Face it: Someone, somewhere is plotting right now how to outperform your company in the marketplace. This is the right book book for those who are paranoid – and for those who ought to be.

November 22, 1994, is the day Andy Grove, then CEO of Intel, began his own experience with what he would later come to call a “strategic inflection point.”

His assistant phoned to tell him that a CNN news crew was coming over to work on a story about a newly discovered flaw in Intel’s famed Pentium computer chip. Grove already knew about the design flaw, which would lead to an error in division once every nine billion times. That meant the typical spreadsheet user would have a problem once every 27,000 years – no big deal. Intel agreed to replace the chip for users engaged in heavy calculations. Then on December 12, word came that IBM was halting all shipments of Pentium-based computers. Given IBM’s status in technology, this was a major blow.

At that point, Intel faced a tidal wave of negative publicity. Grove announced a new policy: Intel would replace a Pentium chip for anyone who requested it. That decision ultimately cost the company $475 million – a lot of money to fix a problem that seldom actually occurred. “What had happened here? Something big, something different, something unexpected.” That something was a “strategic inflection point...

Andrew S. Grove is the former CEO and current chairman of the board of Intel. He is a Hungarian emigrant, having come to the U.S. in 1956. In 1997, he was named Time magazine's "Man of the Year." Grove teaches at the Stanford University Graduate School of Business.

Don’t Take Yes for an Answer
9

Sell the Way You Buy
9