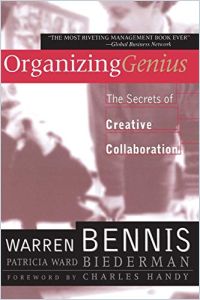 Warren Bennis and Patricia Ward Biederman describe the qualities that generate "Great Groups," capable of meaningful creative collaborations. Despite the myth of individual achievement and heroic leadership, the authors delve into major breakthroughs accomplished by group effort. Often Great Groups unite around the vision of a charismatic leader and work toward that leader’s goal with obsessive commitment. Bennis and Biederman spend much of the book describing the workings of a half dozen such groups - from the Manhattan project to the founders of the Disney Studio to Bill Clinton’s campaign team. These case histories read like individual short stories, but they each tell the saga of a driven creative collaboration. The authors conclude with lessons you can apply to bring the dedication of Great Groups to bear within your organization. getAbstract.com recommends this clearly written, logically organized book to leaders and collaborators in any industry, with two caveats. First, acquiring the requisite charisma is up to you. And, second, as to the authors’ fulsome praise of obsessive work habits, well, that’s so ’90s.

Warren Bennis is a professor of business administration at the University of Southern California’s Marshall School of Business. An expert on leadership, he has written more than 20 books and advised four U.S. Presidents. Patricia Ward Biederman is an award-winning staff writer for The Los Angeles Times.

What Makes a Group Great

Although legend traditionally reveres the "triumphant individual," many historic breakthroughs have been achieved by group effort. People often join their individual and collective talents to "create something new and wonderful." Such creative collaborations have developed world-altering projects, from building the atom bomb to developing computers and the Internet.

Effective groups are increasingly necessary as society becomes more complex and technology becomes more sophisticated. Today, a person working alone probably would find major breakthroughs difficult to achieve. The paradigm of the Great Man or Great Woman is being replaced by the Great Group, comprised of a charismatic leader and a creative, supportive team, including strong individuals of its own. The leader and the members of such teams "achieve something together that neither could achieve alone." Often, the right leader can inspire the development of greatness in the group by helping the individuals find greatness within themselves.

The Characteristics of Great Groups