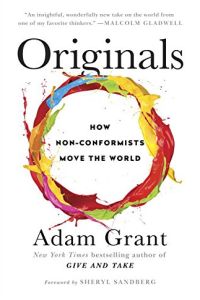 Respected Wharton School professor, consultant and best-selling author Adam Grant raises fascinating questions about originality and creativity in the workplace. The primary theme he explores through studies, anecdotal evidence and business histories is how someone original can perform effectively within an organization. Even the most fluid, forward-thinking companies – or at least those self-described as forward thinking – can resist originality. Your success depends on how you present your original ideas, especially if they don’t fit the type of originality your particular firm endorses. Grant depicts illustrative examples of creative thinkers who turned their original ideas into functioning reality. He shows a rare understanding of how organizations squelch originality and how deft, tactical and strategic the original thinker must be to thrive.

The Wharton School’s top-rated professor Adam Grant, PhD, also wrote the bestseller Give and Take. He consults for top companies and writes for The New York Times. Grant earned his Ph.D. in organizational psychology and is a former junior Olympic springboard diver and magician.

Grant begins by citing the extraordinary success of online eyeglass marketer Warby Parker. He admires the originality of the company’s four founders, all Wharton students, in no small part because he had taught one of them. The founders offered Grant a chance to invest before their launch. He turned them down on the grounds that Luxottica controlled more than 80% of the eyeglass market. Grant didn’t feel that a bunch of student upstarts could earn back an investment. Warby Parker took an original path: Buy glasses online and, if you don’t like them, send them back. Its launch was an amazing success. The founders thought they’d sell three pairs a day, but they sold a year’s worth in under a month and had to create a 20,000-person waiting list. Grant candidly sees his failure to invest as his “worst financial decision” ever. This book sprang from his desire to comprehend his inability to embrace originality when it was right in front of him.

Grant writes in a relaxed, conversational style. His work reads like a cross between a popular business book and an academic business school text. His best-selling success shows that he’s touched a nerve. Although his style is plain vanilla, his huge audience understands the core issue he raises. Even now, when every author preaches the end of command-and-control, top-down management, Grant finds that being original in business is difficult. Many original people present their ideas or themselves in ways that undermine how others regard them. They don’t realize that most of the people they’ll approach – as when Warby Parker’s founders pitched Grant – will default to skepticism. Original thinkers must prepare for that skepticism and be ready to dispel it.