Summary of Our Final Warning 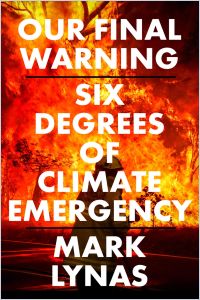 The world’s mean temperature is now 1°C [1.8 °F] warmer than it was before the Industrial Revolution. That may not sound like much, but the rise has triggered unprecedented droughts, wildfires, the melting of glaciers and Arctic sea ice, and the decimation of coral reefs. Science journalist Mark Lynas outlines the degree-by-degree consequences of a continued warming, from the crop failures and food shortages of a 2°C [3.6 °F] rise to the mass extinctions at 6°C [10.8 °F].

Journalist Mark Lynas is visiting fellow with the Alliance for Science at Cornell University. He has written for The New York Times, The Washington Post, The Times and The Guardian.

The world is unlikely to meet the climate goals of the Paris Agreement.

In 2015, the UK’s meteorological service announced that the Earth was about to reach a “global mean temperature” 1°C [1.8 °F] above 19th-century levels. World leaders meeting in Paris pledged to limit the global temperature rise to 1.5°C [2.7 °F] over preindustrial levels – or, in the worst case, to 2°C [3.6 °F]. But in every year since the Paris Agreement signing, emission levels have set new records.

The primary effect of the one-degree rise has been to warm the oceans. The extra heat, along with changes in...

Explainer: Nine ‘Tipping Points’ that Could Be Triggered by Climate Change
8
WMO Statement on the State of the Global Climate in 2019
9
Beyond Global Warming
7
Adapt Now: A Global Call for Leadership on Climate Resilience
8
A Crash Course on Climate Change
7
Is It Too Late to Stop Climate Change?
8