Summary of Our Man 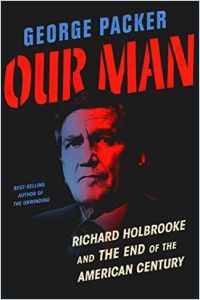 The review below was first published in the getAbstract Journal on Feb 26, 2020.
We’ve reviewed this title for you as we currently cannot offer a summary.

Journalist George Packer provides an in-depth, unsparing portrait of a charismatic diplomat whose career mirrored America’s place in the world.

In a half-century of American geopolitical adventures, diplomat Richard Holbrooke strode the global stage. As journalist George Packer reveals, from Holbrooke’s rookie season in Vietnam to his swan song in Afghanistan, he strived for a spot in the history books. On occasion, as when he helped broker peace in the former Yugoslavia, he lived up to visions of his own grandeur, but most of the time, Holbrooke proved his own worst enemy. Packer uses this unflinching study to tell the story of the United States’ shifting role in the world.

Packer’s efforts made his book a finalist for the Pulitzer Prize in biography and the winner of both the Los Angeles Times Prize for biography and the 2019 Hitchens Prize. The New York Times Book Review recognized Packer’s bold scope when it wrote, “If you could read one book to comprehend America’s foreign policy and its quixotic forays into quicksands over the past 50 years, this would be it.” And Buzzfeed called this “the best guide you can find to navigating a transitional moment in American leadership and foreign policy.”

The Lion and the Nightingale
9