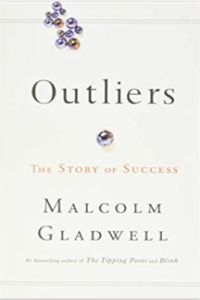 Cultural icon Malcolm Gladwell’s bestseller Outliers is his third book, following The Tipping Point and Blink, which established his brand. Outliers concerns cultural patterns and norms, a reasonable subject for Gladwell, since his astonishing success marks him as an “outlier” himself. Gladwell demonstrates the tenets of his consistent style. He cites many examples from wide-ranging fields and claims that the aggregation of those examples defines a principle. He describes behaviors and ideas in the abstract and then makes them concrete by telling memorable stories that illustrate them. He writes with a great deal of momentum, which is no easy feat. His narrative always seems to have the most powerful flow around ideas that might not stand up so well to deeper scrutiny. Supposed facts or conclusions you might question somehow surge past in a flood of highly readable prose. As in all of his books, Gladwell presents both original insights and banal clichés with the same light fervor, smooth writing and winning sincerity.

New Yorker staff writer Malcolm Gladwell also wrote The Tipping Point: How Little Things Can Make a Big Difference; Blink: The Power of Thinking Without Thinking; What The Dog Saw: And Other Adventures; and David and Goliath: Underdogs, Misfits, and the Art of Battling Giants.

One reason Gladwell is so popular and his books are such runaway bestsellers is that, while easy to read, they make you feel smarter. Gladwell provides perfectly sized nuggets of semi-information to spur watercooler or road-trip conversation. He also seems able to explain things that remain inexplicable to others. Most of his explanations turn out to be simply new ways of describing existing phenomena. Take, for example, his most heralded, remembered and cited assertion in Outliers: the “10,000 Hour Rule.”

Pundits, sports commentators and business book authors all see the 10,000 Hour Rule – that building expertise takes 10,000 hours of practice – as gospel. Many bestsellers cite it as fact. Its ubiquity testifies to Gladwell’s outsized social influence. The 10,000 Rule has become a truism about what success demands. To substantiate it, Gladwell cites computer wizard and Sun Microsystems co-founder Bill Joy, who immersed himself in computer science and programmed constantly at two top universities. He rewrote the programming language UNIX and the computer language Java. Joy is a classic outlier – a person of outsized gifts, vision, dedication and discipline. Gladwell argues, however, that Joy’s native genius came to fruition only because he spent so much of his young life pursuing the primary task of the computer world: programming.

Unlearn
8
The Surprising Science of Meetings
9
Making Up Your Own Mind
9
Write Your Book in a Flash
8
The Acceleration of Cultural Change
8
Lead. Care. Win.
9