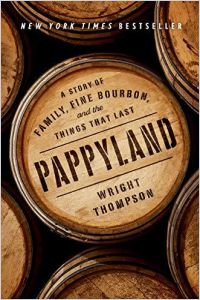 Pappy Van Winkle created a Kentucky bourbon empire in the years after Prohibition, but in the 1960s, drinkers’ tastes changed, and Pappy’s heirs found themselves forced to sell the distillery. As ESPN senior writer Wright Thompson reports in this page-turning blend of biography, autobiography, philosophy and Kentucky history, Pappy’s grandson, Julian Van Winkle III, struggled for years to regain a foothold in the industry for his family’s bourbon. Ultimately, through determination – and thanks to powerful memories and his renowned palate – Van Winkle found new success in his family tradition and returned Pappy’s to its past glory.

The story of the Van Winkle family’s Kentucky bourbon echoes the legends and history surrounding the state’s famed thoroughbred racing. In the elite seats at the Churchill Downs track, the view of the races hasn’t changed for a century.

Watching horse races is one of many family traditions Julian P. Van Winkle III enjoys. The family’s most public tradition, however, is whiskey, beginning with the Stitzel-Weller distillery, which Van Winkle’s grandfather once owned. The distillery shaped Van Winkle’s life, from growing up with it, to losing it and trying to reclaim the family’s wealth, bourbon and reputation.

While corporate bourbon manufacturers claim that they follow a family recipe, most companies buy in bulk from suppliers. Van Winkle, who has an extraordinarily sensitive palate, doesn’t brag about his successes or create backstories for his brands. He seeks to recreate the taste of his grandfather’s whiskey which he remembers from his youth.

The story of the “mythical and rare” Pappy Van Winkle bourbon and of...