Summary of Plagues and the Paradox of Progress 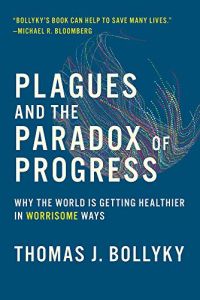 Thomas J. Bollyky, director of the Global Health Program at the Council on Foreign Relations, details the battle against infectious diseases in this fascinating look at history through the lens of microorganisms. He examines the societal influence of major infectious diseases through in-depth case histories. Bollyky explains that contagions still present grave challenges around the world, and suggests ways that governments and citizens can take meaningful action. Readers who enjoyed Jared Diamond’s Guns, Germs and Steel will find compelling insights here – at least about germs – and anyone with an interest in the historic evolution of public health policy will also be intrigued.

Thomas J. Bollyky, JD, is the director of the Global Health Program at the Council on Foreign Relations and an adjunct law professor at Georgetown University.

Plagues and parasites shaped migration patterns and the evolution of cities and states.

Viruses, bacteria, fungi, protozoa, and other microorganisms cause infectious diseases. These contagions influenced human history and shaped the development of cities, trade routes and wars.

Ancient hunter-gatherer societies circulated in smaller bands of 30 to 40 individuals. These foragers moved frequently and their tribes were scattered over wide areas, providing fewer opportunities for germs to spread. The establishment of villages and towns put more people in close contact, which made contagion more likely. The rates of infectious disease increased as groups of people shifted to growing crops and building settlements.

The development of agriculture added to infectious disease hazards, but it also promoted better health. Farming led to larger quantities of available food. More food enabled more people to stay in one area for longer periods of time. People had time to develop immunity to local microbes. Staying in one place allowed them to care for their sick, store...

Bad Advice
9
The Rules of Contagion
7

Coronavirus Outbreak: How Scared Should You Be?
9
Eradication
9

Pandemics Past and Present with Jeremy Farrar
8