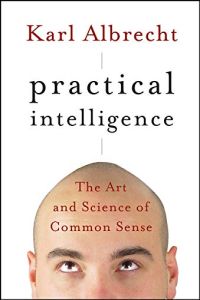 Everyone knows a few super-smart people who continually do super-stupid things. Sure, they can finish a Sunday New York Times crossword puzzle in less than 10 minutes, play and win three simultaneous chess games handily and multiply seven-digit numbers faster than a calculator. But they also can’t hold a job, are given to fulminating about bizarre pet causes (“Restore the Carolingian Dynasty now!”) and can’t shut up about their “brilliant” ideas (“You mean you didn’t read my 427-page proof of Goldbach’s conjecture yet?”). What’s going on? Well, if Karl Albrecht’s ideas are right, IQ isn’t the whole story of human intelligence. And it may not even be most of the story. Perhaps more important than raw IQ, particularly in today’s world, is practical intelligence: the ability to use common-sense reasoning in a structured way to solve relevant problems. Fortunately, practical intelligence, like other mental skills, is not fixed at birth. How can you develop it? Start with this sensible book, which getAbstract recommends to anyone who wants to be not only smart but also effective.

Karl Albrecht is a management consultant, futurist, speaker and author.

Time was when “intelligence” meant IQ, that mysterious, general intelligence factor “g,” beloved by psychometricians. A lucky few were born with lots of it, others had little of it and most people desperately wanted more of it – whatever, exactly, it was.

Then along came Harvard psychologist Howard Gardner. Feeling that human capability couldn’t be reduced to a single metric, Gardner posited “multiple intelligences,” a notion he popularized in his 1983 book, Frames of Mind: The Theory of Multiple Intelligences. Gardner identified seven “intelligences” and gestured at an eighth. Other thinkers have come up with more. But rather than getting carried away (“I have knitting intelligence!”), simply think of people as having six intelligences: