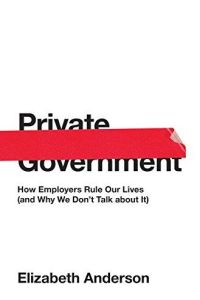 Philosophy professor Elizabeth Anderson presents a brief, thought-provoking and entertaining discussion of history, philosophy, economics and politics in this exploratory debate about workers’ rights in the United States. In the first half, she shares her provocative view of US workers as subject to the whims of bosses with an incredible range of powers. In the second half, she invites her academic peers to critique her position. The result will make any worker, boss or analyst who likes academic arguments think twice about the nature and fairness of employment in America.

Professor Elizabeth Anderson teaches and researches moral and political philosophy and women’s rights at the University of Michigan.

Through a state-sanctioned form of government, bosses in the US rule their workers’ lives, yet workers, politicians and the public don’t discuss it.

Prior to the English Civil War of the mid-17th century, a deeply hierarchical society placed most people under the near-absolute authority of a master, argues professor Elizabeth Anderson. Men subjugated women. Noblemen or royal appointees ruled trade and vast swaths of land, including all the people who lived there. They served the king, who answered only to God.

The same era in England saw the beginning of the end of the feudal economy and the slow emergence of a more open, trade- and market-based economy. This period gave rise to the “Levellers” movement. The Levellers sought greater equality for the poor, and saw possibilities in free markets and trade. Increasingly, a class of “masterless men” broke away from their overlords and became small land-holding farmers, artisans and shopkeepers.

The Levellers believed that ending royally sanctioned monopolies would open the markets to more independent merchants. This and free ...