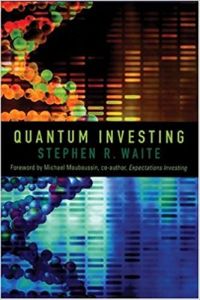 Author Stephen R. Waite is a Wall Street veteran, but despite its title Quantum Investing is not about investing (the few investor-oriented tips are at the end of each chapter and at the book’s conclusion). Rather, it is a futurist manifesto, an infectious, heady hodgepodge of science textbook and thought experiment, which reads like a sequel to Future Shock. Waite takes you on a whirlwind tour of quantum theory, which has enabled astounding technological advances (note the glossary of physics terms and the timeline of relevant scientific developments). He assesses the accounting industry as hopelessly out-of-date when it comes to valuing intangible assets, and offers a thought-provoking discussion of the stock market, chaos theory and complex systems. You’ll probably be skeptical of - but intrigued by - the discoveries he predicts for the twenty-first century. getAbstract.com recommends this to executives who are interested in a big-picture treatment of the economic evolution, or who are science (or science-fiction) buffs.

Stephen R. Waite is a 16-year Wall Street veteran who is currently managing director and Chief Knowledge Officer of the investment advisory firm Trilogy Advisors, which has several billion dollars under management.

The "New Economy" is the Quantum Economy

Sir Isaac Newton’s discovery of the laws of classical physics made possible the technological changes that powered the industrial revolution. Over the next few hundred years, the introduction of machines and factories irrevocably changed the world’s economy. Those changes created the world we live in today.

At the beginning of the twentieth century, a new branch of physics emerged. This science, quantum theory, enabled more technological and economic change in the past one hundred years than classical physics enabled during the industrial revolution. Today, quantum theory-derived inventions account for one-quarter of the developed world’s gross national product. These inventions include the transistor, the superconductor, the laser and the microprocessor (an essential component of all digital computers).

Investors should have a basic understanding of quantum theory, because it is fundamental to many new technological innovations - and therefore to new companies and products. Quantum theory describes the behavior of matter and energy at the atomic and subatomic levels. In this microscopic universe, the classical laws of...

Convergence
9
Know This
8
Hit Refresh
8
Why?
8
The Driver in the Driverless Car
9
Capitalism Without Capital
8