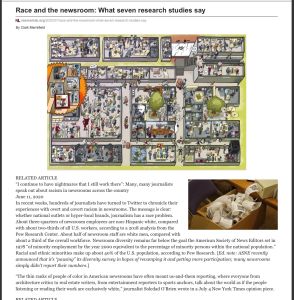 Race and the Newsroom

Clark Merrefield
Niemanlab, 2020
Get the Report

As racism tears at the social fabric, journalists are examining their own biases in the newsroom and attempting to find cures. Reporting for NiemanLab, writer Clark Merrefield examines seven research studies focusing on race and the newsroom. Each research project posits a different question, but the answers apply across the board, from visually reflecting a community to leaning into its needs before problems arise. These studies reveal ways the media could address internal bias and challenge the very idea of objectivity in journalism – whose objectivity?

Seven research studies focusing on race and the newsroom find that in this era of Civil Rights protests, journalists are calling out their own newsrooms for overt and covert racism.

Although the American Society of News Editors set a goal in 1978 of achieving minority employment by the year 2000 that reflects community demographics, newsrooms have fallen short.

These seven peer-reviewed research studies find that journalistic “objectivity” has been largely a construct of the mainstream, majority media as the Black media followed its own path. Even in local newsrooms, Black women chose an approach labeled as “active objectivity” that others did not pursue. The problem is not simple; the path to diversity looks different for each newsroom. From a diverse media universe, a clear message emerges: “Journalism has a race problem.”

As a backdrop for the results of these seven studies, consider this 2018 data analysis offered by the Pew Research Center:

Writer Clark Merrefield covers economics and inequality for Journalist’s Resource. Previously, he was a reporter for Newsweek and The Daily Beast. He reviewed seven studies:

Covid 19 Has Ravaged American Newsrooms and Why That Matters
8

How Are We Feeling?
8

Tomorrow’s life-or-death decisions for newspapers are suddenly today’s, thanks to coronavirus
8