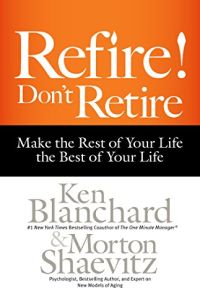 Ken Blanchard, author of The One Minute Manager, and geriatric psychologist Morton Shaevitz combine their impressive talents and admirable ideas to explain how older people can use the principles of “refiring” to infuse their senior years with zest. This accessible parable offers sensible, helpful ideas for readers, old and young, who want to get more out of life. The story may seem somewhat saccharine in places, but perhaps that’s unavoidable fallout from its stated mission: to share ideas that can bring positive change into people’s lives, organizations and society. getAbstract recommends the authors’ practical, spiritual and easily applicable approach to anyone seeking a richer, more engaged existence.

Ken Blanchard, co-founder of The Ken Blanchard Companies, is the author or co-author of motivational books with combined sales of more than 20 million copies. Morton Shaevitz is an associate clinical professor of psychiatry at the University of California, San Diego.

“Old Geezers” of the World, Unite!

At Lincoln High School’s 45th reunion, Larry Sparks asked his wife, Janice, “Who are all these old geezers?” She replied, “I’m sure they’re thinking the exact same thing about us.” When a tired-looking man with grey hair approached them, Larry needed a few seconds to recognize Rob Briggs, the smart student who had helped him with science during high school. “Hey, Rob…How you been?” said Larry. “Ah, you know, not great – but consider the alternative, right?” said Briggs.

Two nights later, at the weekend reunion’s concluding dinner, the Sparkses bumped into Briggs again. They discussed their mutual observation that many of their classmates acted as if they were enduring prison sentences rather than enjoying their lives. Seniors are not the only ones who seem exhausted, said Briggs, noting that his young colleagues often had the same air of being worn-out.

“I want to embrace what’s left of life, not complain about it,” said Janice, an active volunteer, and Larry agreed. Briggs told them to take up that topic with the good-looking man standing near the dance floor. “Is that our ninth-grade biology teacher...

The Servant Leader
8
Legendary Service
7
Great Leaders Grow
6
The Secret
7
The Leader Within
5
Leading at a Higher Level
8
The Leadership Pill
6
Whale Done!
6