Summary of Regionalization vs. Globalization 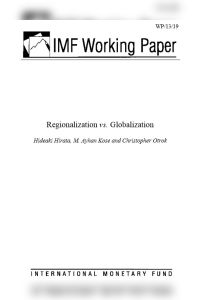 This International Monetary Fund report expertly addresses core questions on the relationship between regionalization and globalization. Though globalization is now a well-known and accepted fact of economic life, its impact isn’t uniform or inevitable. Regionalization is a countervailing force in the national and international business cycles. Professors Hideaki Hirata and Christopher Otrok, and IMF researcher M. Ayhan Kose, delve into masses of data from 106 nations to assess the strength of that influence in driving economies. Their conclusions could help governments set economic policy and guide corporations with global or regional operations. getAbstract suggests this working paper to economists, policy makers and financial professionals who wish to understand how the seemingly monolithic global economy is giving way to increasingly powerful regional alliances.

The Framework: Globalization and Regionalization

Since the 1980s, globalization has reshaped the world economy. An unprecedented volume of international trade has spread throughout the world, and nations’ finances are now interwoven to an unprecedented degree. Over recent decades, “economic linkages” also have strengthened within specific regions.

Given that shift, questions arise about what roles regional and global forces play in the world’s economy. For example, why did various regions perform so differently during the global financial crisis that began in 2008? Why did Europe and North America stumble badly even as Asian economies proved resilient? New research produces a striking answer to these questions and more: Even as the world economy has become more globalized, regional business cycles have emerged and gained strength.

The Database and Methodology