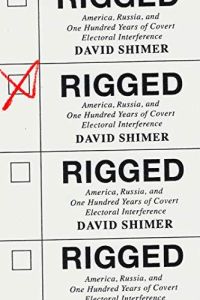 America, Russia, and One Hundred Years of Covert Electoral Interference

The review below was first published in the getAbstract Journal on Feb 16, 2021.
We’ve reviewed this title for you as we currently cannot offer a summary.

David Shimer – a New York Times, New Yorker and Foreign Affairs reporter and global fellow at the Woodrow Wilson International Center for Scholars – amply demonstrates his reportorial skills and understanding of international politics in this overview of how Russia and the United States have each meddled in democratic elections over the past century.

By early 2016, he reveals, the United States knew that Russia planned to interfere with the US election, but it failed to anticipate Russia meddling with people’s minds on social media. Russia’s objectives were traditional: to help a preferred candidate and promote discord. But, Shimer argues, the digital age gave Russia new and powerful tools. This detailed history provides a useful reminder of the need for democracies to protect the integrity of their elections.

The Age of Zombie Democracies
9
Book