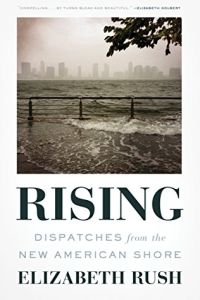 The wetlands of the world are dying, drowning beneath the encroaching seas, which are rising due to climate change. Elizabeth Rush, professor of creative nonfiction at Brown University, writes with great poetic feeling and deep research about the losses accruing during the sixth extinction event in the Earth’s history, going on now. She sounds a passionate alarm, including a call for intelligent “unsettling,” as communities face the need to retreat from the coasts and marshes. Yet, Rush finds reasons to hope in the opportunities that change affords to mend old injustices and create a new, respectful equilibrium.

Elizabeth Rush is a journalist and a professor of creative nonfiction at Brown University.

The View from Jacob’s Point

The tupelos at Jacob’s Point, Rhode Island, are haunting, leafless sentinels as sea rise disrupts life as it’s been lived for centuries. The tupelo trees grew in the swamps, Rush reports, but they succumbed to rising salt water and are now dead. When they died, the bank swallows left. Most US endangered species depend on disappearing wetlands, but such scenarios are playing out on every coastline. Five major extinction events have taken place in the Earth’s history. A majority of scientists say Earth is now undergoing a sixth. No one can predict how high the sea will rise, and it will rise higher in some places, like the US East Coast.

As Rush describes evocatively, tidal waves cover low marsh twice daily. Salt water covers the high marsh during storms. As the land slopes up, the soil dries. The tides bring in sediment and vegetation traps some of it in a slow accretion that becomes new land. As salinity increases downhill, rhizomes – the root systems of marsh plants – retreat and grow uphill, looking for sweeter water, thus the vegetation and its ecosystem migrate. Their accumulation lends structure to wetlands. But rapid sea rise, Rush reports, overwhelms accretion. Marshes everywhere are trapped in the dwindling space between rising seas and human development. They drown, like the black tupelo trees.

What Landmark COVID Vaccine Results Mean for the Pandemic
8
The Unnatural World
9
Out of Balance in the Arctic
7
Global Warming of 1.5 °C
8