Summary of Running on Empty 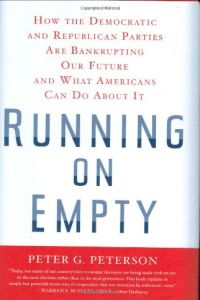 Few authors have former U.S. Treasury official Peter G. Peterson’s credibility, so few others can demand the attention this book deserves and is receiving. Released in an election year, this vitally important, clearly presented treatise commands bipartisan action. Peterson demands explanations from the professional politicians who are largely responsible for jeopardizing America’s future growth and standard of living. With a firm grasp of complex economic, political and demographic relationships, buttressed by facts from political and economic think tanks, Peterson, an experienced official in former Republican administrations, lambastes both parties. He explains how they have neglected their fiscal stewardship in order to pacify special interest groups and constituencies at the expense of the entire nation. Both parties are guilty, Peterson charges, of violating the public trust. getAbstract.com thinks this excellent example of political economic writing should be essential reading for anyone interested in America’s future.

Peter G. Peterson is the chairman of the Blackstone Group, chairman of the Council on Foreign Relations, and former chairman of the Federal Reserve Bank of New York. He is founding president of the Concord Coalition. He has written four other books, including Gray Dawn: How the Coming Age Will Transform America - and the World.

Shifting to the Supply Side

The Republican Party, long considered the best representative of individual rights and self-determination, has pushed for fiscal responsibility and financial stewardship since its origins in the 1850s. However, as America matured and became more internationalist, Republicans gradually abandoned advocating balanced federal budgets. They have come to view deficit spending as a political elixir that can invigorate the nation.

The Financial Crisis and the Free Market Cure
7
The Chief
8
Lying for Money
8
It’s Even Worse Than You Think
8
Fear
9
55, Underemployed, and Faking Normal
9