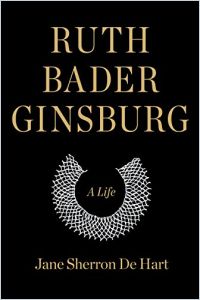 She wasn’t the first woman on the Supreme Court, nor was she the first justice to take a stand on controversial issues, but she is the first to acquire a legitimate pop-culture following that has inspired t-shirts, jewelry (dissent collar necklace, anyone?) and memes. You may know Ruth Bader Ginsberg as the scrappy 85 year old whose various illnesses have inspired people to offer to donate their organs to keep her going. You might have seen one of the critically acclaimed movies or documentaries about her life. If you’re a conservative, you may see Ginsberg as an evil force for her championing of abortion. If you’re a liberal, you’re probably one of millions who breathed a collective sigh of relief when the venerable justice returned to work in mid-Februrary, 2019 after surgery to remove lung cancer. Regardless of your political persuasion, Jane Sherron De Hart’s nearly-800-page tome is a good place to start if you wish to form a truly well-informed opinion of the Notorious R.B.G. It is an extensive and lovingly crafted tribute to Ruth Bader Ginsburg, and a record of her fight – quiet, classy, reserved, yet persistent – against the sex-based inequalities that marked much of the 20th century.

A Commitment to Education

At the start of De Hart’s narrative stands an ominous conjunction of triumph and disaster: Two days before Ruth Bader Ginsburg, née Joan Ruth Bader graduated high school, her mother, Celia Bader, closed her eyes for the last time. Before her death by cervical cancer, the historian writes, Celia had worked tirelessly to instill a strong desire for education and independence in her only surviving daughter – her eldest, Marilyn, died of spinal meningitis when Ginsburg was an infant. At age 17, the still grieving Ginsburg left her father, Nathan, in Brooklyn and began her undergraduate education at Cornell University. Ginsburg, who started going by her middle name in kindergarten to avoid confusion with other Joans, enjoyed her music, literature and art history classes. But, as De Hart points out, she found her true academic calling while attending Robert Cushman’s Constitutional Law class. Cushman recognized Ginsburg’s aptitude and served as a mentor while she refined her political beliefs. Her interest in law was further cemented by Milton Konvitz’s “American Ideals” class, where she learned that a career in law could be both “personally satisfying” and a means of working to “preserve the values that have made this country great.”

Though an exceptional student, Ginsburg learned to hide her academic inclinations. According to De Hart, most of her fellow female classmates saw marriage as the true purpose of attending college, and believed an overly studious nature was anathema to that goal. Still, Ginsburg managed to meet a man who admired her intelligence and supported her career aspirations: Marty Ginsburg. “He was the only guy I ever dated who cared whether I had a brain,” De Hart has her saying. Ginsburg’s future parents-in-law, Evelyn and Morris, were similarly supportive. Ginsburg married Marty on June 23rd, 1954, shortly after graduating. Marty put his Harvard Law studies on hold, and the couple moved to Oklahoma so Marty could fulfill his Korean War duty at Fort Sill. There, Ginsburg took a job in Lawton’s Social Security office, where she took up the cause of Native Americans who were being denied benefits.

Leadership in Turbulent Times
9
On Grand Strategy
9
Make Trouble
8
War in the North? Israel, Lebanon, Syria and Iran
7
The Chief
8

Dawn of the Code War
8