Summary of Searching for a Corporate Savior 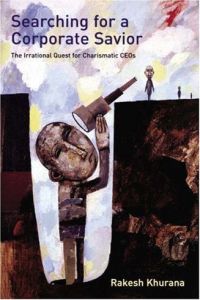 Charisma and reputation have replaced management experience and industry expertise in the corner office. Certainly that’s not news to anyone who has read the business press at any time in the past decade, but the trend is certainly important enough to warrant the comprehensive examination provided by Rakesh Khurana. Starting with an analysis of the increasing power of activist institutional investors, Khurana traces the process through which boards of directors have forsaken mature managers for media darlings in their CEO searches. In light of the spate of embarrassing and enraging CEO scandals, getAbstract.com recommends this book to all readers.

Rakesh Khurana is an assistant professor of organizational behavior at Harvard Business School. He began this project as his 1998 dissertation: The Changing of the Guard: Causes, Process, and Consequences of CEO Turnover, using a database of all the CEO turnovers in the 850 largest American corporations from 1978-1996.

The rise of investor capitalism and changing conceptions about business leadership have significantly altered the role of the chief executive officer. This shift is of critical importance to society as a whole, since the decisions made by CEOs affect the lives of millions of Americans. Due to the pervasive economic influence of major corporations, strategic choices of CEOs have ramifications that reach far beyond their own companies.

Institutional investors have been the driving force behind the change in the CEO’s role. Institutions, which own a huge percentage of the shares of most publicly traded companies, have become more active in attempting to influence the direction of corporate management. In order to protect the value of their holdings, institutional investors have started pressuring corporate boards to make CEOs, and management in general, more accountable. This pressure has altered the relationship between CEOs and the boards that they once dominated, and in some cases, even served on.

This new relationship has produced a surprising result, however. Rather than hiring acquiescent CEOs who will do their bidding, corporate boards ...