Summary of She Helped Wreck the News Business. Here’s Her Plan to Fix It 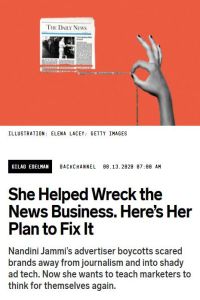 Nearly everyone has experienced that phenomenon of an ad campaign following them around the internet. But are the sponsors aware that their ads are also following click-collecting bots? Or that automation tools designed to protect brands from association with “controversial” content are drawing advertising dollars away from reputable publications and toward junk websites? Probably not. In this WIRED article, Gilad Edelman explains how marketing specialists Nandini Jammi and Claire Atkin are trying to change online advertising, and how they may just elevate public discourse in the process.

Gilad Edelman covers politics for WIRED. He worked, previously, as executive editor of the Washington Monthly.

When Claire Atkin of Check My Ads offered to help Andrew Lissimore of Headphones.com figure out where his online advertising dollars went, Lissimore was “pretty confident Atkin wouldn’t find anything alarming.” Then, Atkin revealed Lissimore was, inadvertently, wasting the bulk of his daily $1,200 advertising budget. Lissimore learned, for example, that 80% of his ads appeared on Android games, a platform that was unlikely to translate to sales given that 95% of the people who visit Headphones.com do so from an Apple device. The ad placements were simply earning money for fraudulent click-collectors.

The non-fraudulent uses of Lissimore’s advertising dollars was also troubling. Headphones.com ads were running on Breitbart, a far right news site, and The Epoch Times, a publication that promotes conspiracy theories.

Tomorrow’s life-or-death decisions for newspapers are suddenly today’s, thanks to coronavirus
8
Targeted Advertising Is Ruining the Internet and Breaking the World
7
How to Fix Facebook – Before It Fixes Us
8
It’s All About Connection
8
You Can Handle the Post-Truth
8
The Internet Apologizes…
8