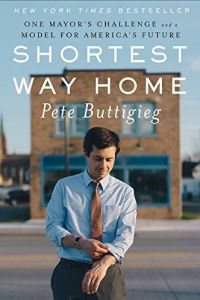 Despite running a little-known city in flyover country, since announcing his presidential candidacy, Pete Buttigieg, the Democratic, openly gay mayor of South Bend, Indiana, has emerged as a real contender in the national political scene. This memoir details Buttigieg’s varied résumé, including his time as a Harvard undergraduate, a tour as a Rhodes Scholar, a stint at consulting firm McKinsey and six months on active duty in Afghanistan. Along the way, Buttigieg lays out his vision for America – a vision which has, clearly, resonated with many Democratic voters. As of June 2019, oddsmakers had him trailing only Joe Biden and Bernie Sanders among the 20-plus Democratic contenders.

Buttigieg takes pains to position himself as a pragmatic leader rather than an ideological one in his engaging and surprisingly well-written book. ​​​​His explanation of ​why he chose to return to South Bend and of the thoughtful, practical steps he took to help revitalize the “dying” rust belt city aim to highlight the ways in which he differs from the typical, slogan-spewing Washington politician. While Buttigieg’s liberal views likely won’t sway sworn conservatives, his analyses of how his experiences in South Bend and Afghanistan translate to the challenges the nation faces today offer food for thought to voters of all political stripes.

Pete Buttigieg is the two-term mayor of South Bend, Indiana. Educated at Harvard and Oxford, he is a Navy veteran and a former consultant at McKinsey.

Pete Buttigieg was born in South Bend, Indiana, in 1982 – when the city’s economic glory days were long past.

As an older millennial, Buttigieg notes that, while he remembers life before cell phones and a geopolitical scene that included the Soviet Union, he is too young to remember South Bend’s heyday as a manufacturing hub. South Bend once boasted a Studebaker plant that was the world’s biggest car factory. After the factory closed in the early 1960s, however, South Bend’s fortunes took a sharp downward turn. Over a half-century, South Bend’s population fell from 130,000 to 100,000. Per capita personal income in 2010 was less than $19,000 – just half the US average. A January 2011 report in Newsweek listed South Bend among “America’s dying cities.” Young people were fleeing, the magazine noted.

As a teen, Buttigieg attended St. Joseph High School – a Catholic institution – where he was elected class president. Buttigieg was accepted to Harvard. Buttigieg was still at Harvard when the September 11 terror attacks took place. He recalls being impressed by President Bush’s initial reaction, which included visiting a mosque and drawing the distinction between Muslim terrorists and the mainstream tenets of the faith. Still, Buttigieg took part in public protests against US invasion of Iraq. Buttigieg argues that, while the rapid fall of Saddam Hussein’s regime seemed to vindicate the invasion and make an anti-war stance seem ridiculous, the chaos which followed this initial victory proved that the expansion of US ambitions, from fighting al-Qaeda in Afghanistan to a “Global War on Terror,” was a mistake.